Very excited to launch How a Poem Moves tonight at Holy Blossom Temple! Here are the details.

Very happy to report that How a Poem Moves is now officially in my dirty little hands! It doesn’t officially launch until March, but pre-orders from ECW Press should arrive very soon. Thanks for your support, everyone. Hope the book gives you pleasure!

Looks like the launch for How a Poem Moves is going to be scheduled for March 18. Details to follow, but in the meantime, here‘s a link to 20 books that Deborah Dundas from the Toronto Star is looking forward to reading in 2019. Guess which collection of essays about contemporary poetry is on it…!

Things are getting exciting over here. How a Poem Moves is in the proofreading stage of the book-making process. Blurbs are being gathered, final touches are being made, plans for a launch in March are happening. More details to come, but in the meantime, ain’t that cover fabulous?!

What you see in the picture is an Advanced Reading Copy, or ARC. That’s the thing the publisher sends to book reviewers, festival hosts, and those sorts of people. It’s understood that the book isn’t final, that there may be some errors and omissions and such. But it feels pretty nice in my hands, I have to say.

Oh, but you can’t have the cookie. I’m sorry not sorry to report that that particular cookie is no longer with us. 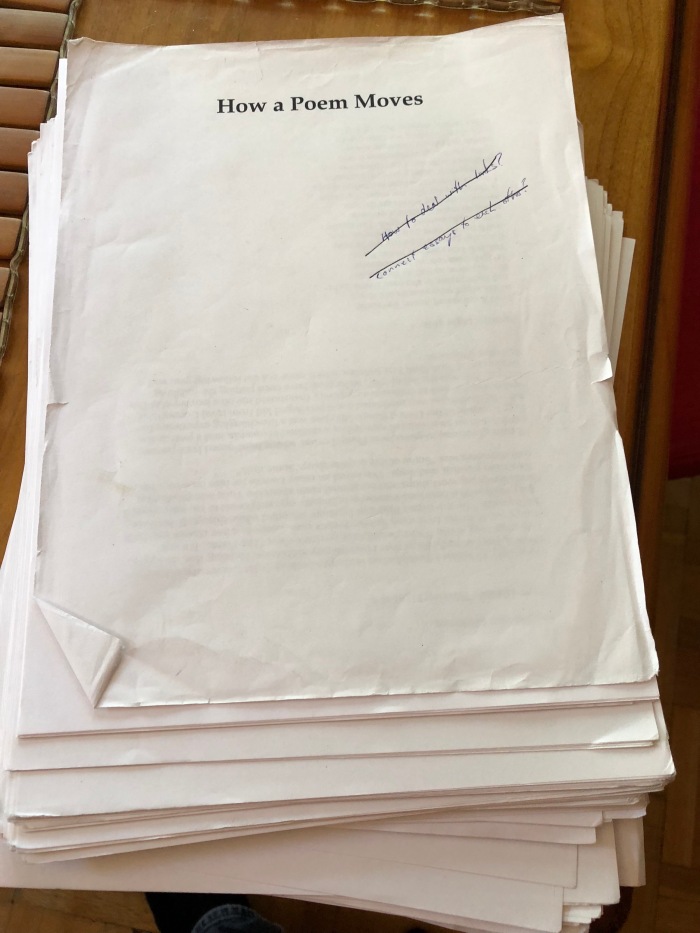 I’ve completed a draft of the full manuscript for the How a Poem Moves book! Still lots of editing to go, but it’s a nice hurdle to clear, and I’m excited to work with the good people at ECW to get this out into the world. Stay tuned!

— first publication in Poetry (March 2018), used by permission of the poet

Kaveh Akbar’s “Morning Prayer with Rat King” is not an ordinary fajr (dawn prayer). Akbar is an Iranian-American poet and professor, who currently teaches at both Purdue University and Randolph College. A vibrant voice in contemporary poetry, he is known for founding the online interview project Divedapper, as well as his debut full length collection, Calling a Wolf a Wolf, published by Alice James Books in 2017. Akbar often references his Shia background in his latest collection, so “Rat King” fits comfortably within his oeuvre. In spiritual poetry, it is often challenging to determine whether a poet identifies with a religion or uses it as a literary device. In Akbar’s case, Islam may be both: his morning prayer is a meditation on the varieties of evil we encounter in our lives and the urge to protect ourselves with revelatory writing, be it poetry or the word of God.

Akbar’s speaker considers himself God’s “favorite pilgrim,” implying that he is no stranger to prayer. His “Morning Prayer with a Rat King” is a devotional piece for those of us who can’t keep our mind focused during worship. Perhaps that’s why obligatory prayer is such a powerful force in the lives of people of faith. The ritual of prayer overrides the constraints of time, location, and mood. Thus, the poet’s prayer is far from standard or perfect. The speaker’s mind is occupied by pocket-sized evils–not Satan or hell–but the horror of a rat king. 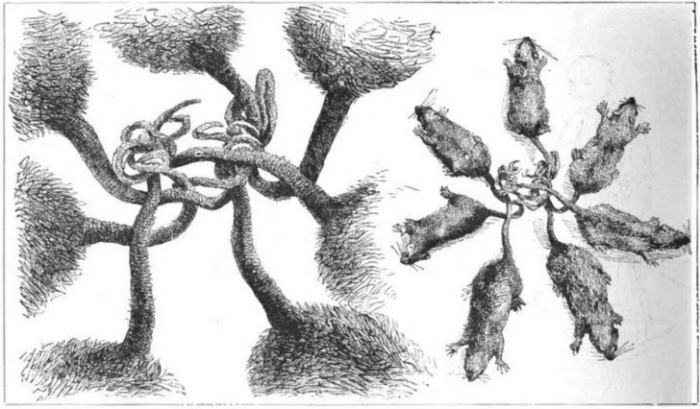 Illustration of a rat king from volume 6 of The Picture Magazine, 1895. PUBLIC DOMAIN via Mental Floss

A grasp on the puzzling phenomenon of rat kings is crucial to our understanding of the poem. A rat king is not a single royal rat, but instead a group of rodents attached by the tail by excrement, sap, or some other adhesive substance. The rarity was first recorded in the 1500s, when the rat king became known as a bad omen, perhaps because of the common association between rodentia and the plague. Additionally, the German translation of “rattenkönig” was an insulting nickname for the Pope, who was believed to be supported by a pack of minions, like a leader rat. Consequently, the rat king has continued to occupy the minds of those swayed by myth or fascinated by science. Cryptid or not, the speaker considers such a creature (or collection of creatures, rather) as his partner in prayer.

Akbar’s rat king is buried within the poem, unmentioned until its third stanza. The first stanza of the poem potentially addresses the poet’s search for meaning; nautical imagery allows the speaker to unify his relationship to higher power with a gnawing nihilism.  The speaker believes that human bones are too “full of gravity,” or rather “alarming importance,” for us to swim easily. He seems to glance into a void, the “ocean,” and blind himself in the process, losing his glasses attempting to grasp at a branch. The “ocean which is far too deep to dredge” lends itself to interpretation. On the one hand, the depth and vastness of the sea may reflect God’s infinite wisdom and power, which inspires the speaker to humble himself before Him and ask for protection. On the other hand, a gaping ocean that extends as far as the eye can see, with or without the speaker’s glasses, is a reminder of the possibility of the His nonexistence. Akbar’s manipulation of vaguely scientific language such as “weight” and “gravity” juxtaposed with the more literary “alarming importance” illustrates the struggle between disbelief and faith that comes with prayer. The poet’s proposed antidote is to “name what we are able.” The act of naming something lends it importance, a beginning and the possibility of an end. Without a name, the rat king remains a disgusting accident; given a title the creature is mythologized, granted enduring significance.

Akbar’s playful language is that of a wandering mind, as seen when the poet puzzles over why “oceans give us rain/but we don’t call rain ocean.” What at first sounds like a deeply philosophical question is really a bridge to the rat king mentioned in the poem’s title. Akbar is concerned with the elasticity of language in two ways: first, how deceptive names can be, and second, whether a poem itself can be a prayer. He encourages the reader to imagine a sea made up of tears, simply because it would “explain the salt,” and obviously,“tears must go somewhere.” If the benevolent ocean of the first stanza is only the runoff from a tot’s tantrum, what is a rat king really and why does Akbar feel such a kinship to it?

Fittingly, Roi de rats is a grotesque misnomer. Akbar writes, “knot a dozen/rats together by the tail and you’ve got a roi de rats.” His offhand tone in this single line is a departure from the melancholic language of the previous stanzas, ending in a neat French rhyme. His instruction is straightforward, dismissing the mystery of the rat king’s origin as a simple case of tying tails together. Yet, he pivots again in the following lines, lamenting: “who mourns a rat king/frustrated chthonic always the biter never the bitten/they give us the evil we need to stay moored to.” Akbar’s sudden gravity suggests that the speaker’s mind has come to halt. He is no longer musing ironically about how the ocean got its name or whether it’s full of tears. Instead, Akbar has fixated on the rat king as the epitome of evil. The creature, which Akbar describes as “chthonic” or underworldly, is the closest thing to Satan in the poem. For one thing, hell in the Bible or Quran is difficult to comprehend. The extreme suffering outlined in holy books, complete with unimaginable fire and violence, seems more like a fairytale than a legitimate destination. The rat king, relatively small and cartoonish, is a less abstract “evil we need to stay moored to,” prompting revulsion and questioning. Perhaps the speaker sees his sins and fears as rats knotted by the tail by scum and muck, a sum total of wickedness. Perhaps he has received a bad omen which inspired him to pray. It’s possible that the speaker t has allied himself with the rat king itself; the speaker is self aware, conceding that he would “break any promise to avoid finding one.” Obviously, the creature fascinates the him, interrupting his stream of consciousness and refocusing (or “mooring,” a nod to the ocean) his prayer, as emphasized by the sudden enjambment between “finding/One,” and further, “one” and “Oh Terrible God.”

Thus, Akbar’s morning prayer raises the questions, “Is there a right way to pray? And if so, does a poem count?” Perhaps the answer lies within the words of the poem. “Morning Prayer with Rat King” contains all the elements of worship that varying faiths can agree upon: humility and respect, fear and love of the Creator, an acknowledgement of human frailty and the possibility of a greater beyond. In organizing his consciousness into a series of loosely connected images and naming them, Akbar is both successful in his fajr, but also in mourning the rat king, which has no one to pray for it, who is “always the biter never the bitten.” Akbar’s rat king is a pesky companion, and an enduring reminder of the evil that is both external and internal.

Sana Mohtadi is a rising sophomore studying English at the University of Toronto, born and raised outside Boston. Most recently, her poetry has been published in the UC Review, the literary journal of University College at U of T.

As you know, this blog has been on hiatus while I’ve been putting together the How a Poem Moves book that ECW Press will be publishing next year. I’m busy editing the 25 essays that are here already, writing 11 new essays and an introduction, and completing the other paperwork that goes into turning a blog into a book.

Meanwhile, in my classes I’ve been occasionally assigning “How a Poem Moves” essays to my students. Whenever I’ve done so, I promised them that if any of their submissions were strong enough, I would publish it as a “Guest Post” on this blog.  I hoped that would be a motivator. For some students, I think it was.

So I’m very pleased to let you know that later this week – probably Thursday – there will be a Guest Post on the blog from Sana Mohtadi, a student who just finished her first year at the University of Toronto. She’s written an insightful essay on a terrific poem by Kaveh Akbar, one of the more dynamic new poets to appear in the American literary scene in recent years. A new voice on a new voice.

I’m sure you’ll enjoy it, so stay tuned.